Such a simple feature: double-tap to zoom in on the Go board. On the iPhone, it conveniently zooms to use the full height available. So why does SmartGo Kifu have a setting to turn it off? 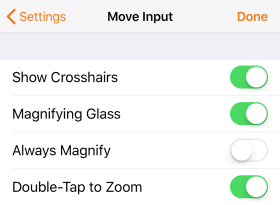 When SmartGo detects a tap on the board, your intent is not clear: do you plan to play a move, or is there a second tap coming? On iOS you can tell the system to disambiguate between the two gestures – for the single-tap to succeed, the double-tap has to fail:

The price you pay is that move entry is delayed by a quarter of a second. Thus that setting gives you a choice: convenient zooming or faster move entry. Not a good choice. (But at least you now know how to speed up move entry.)

There’s a better way to solve this: always play the move right away. Then if it turns out to be the first tap in a double-tap, undo the move and zoom the board instead. Fast move entry and zoom, no setting needed. However, that means being able to cleanly undo the move (and anything else that a tap on the board might do), and in SmartGo Kifu, that would be harder to implement than what the feature is worth.

Rewriting SmartGo in Swift is still work in progress; a long journey. But thanks to less technical debt, I’m able to add features like undo, and thus make move input fast while still allowing you to double-tap. Getting rid of a confusing setting always makes me happy.