SmartOthello achieved two of my goals for the app: it helped me learn Swift, and it gave me a reboot of the user interface that will influence the next versions of my Go apps. However, due to licensing restrictions, I couldn’t experiment with business models. For the first year, MegaHouse (who owns the license to Othello) was only willing to accept a paid-up-front app. I priced it at $2.99 — same as SmartGo Player, which is selling well. It turns out that Othello apps are a crowded market to compete in, and sales have been disappointing. 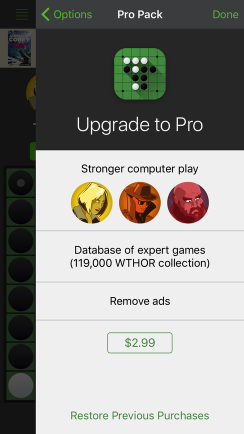 After renegotiating that license, SmartOthello 2.0 is now free, with a $2.99 Pro Pack in-app purchase that:

As for ads, I don’t want to give over part of my app’s screen to something garish that I don’t control. I’ve decided to follow Marco Arment’s lead and just roll my own. Their main purpose is to give you an extra kick to invest in the app so you can enjoy the full experience as it was designed.

Some of the ads promote the Pro Pack. For example:

Some promote my own apps:

Some promote apps that I personally enjoy and recommend, mostly by indie developers. If people tap on the ad and purchase those apps, the affiliate fee (still at 7%?) helps, but more importantly, it helps another indie.

And a few are links to books on Amazon that I’ve enjoyed, again with an affiliate link.

I expect income from those affiliate links to be minimal, but if those ‘ads’ nudge you to upgrade to the full experience, they have fulfilled their purpose. And they’re reasonably stylish, they’re accessible and localizable, there’s no user tracking, and you can even swipe to the next/previous ad anytime.

It’s an experiment. I’ve tried to find the right balance between being obtrusive and being obnoxious; most likely, I have not made them obnoxious enough. SmartOthello will be my guinea pig before I make any changes to the business model of my paid Go apps, SmartGo Player ($2.99) and SmartGo Kifu ($19.99).